Vale His Royal Highness The Prince Philip The Duke of Edinburgh 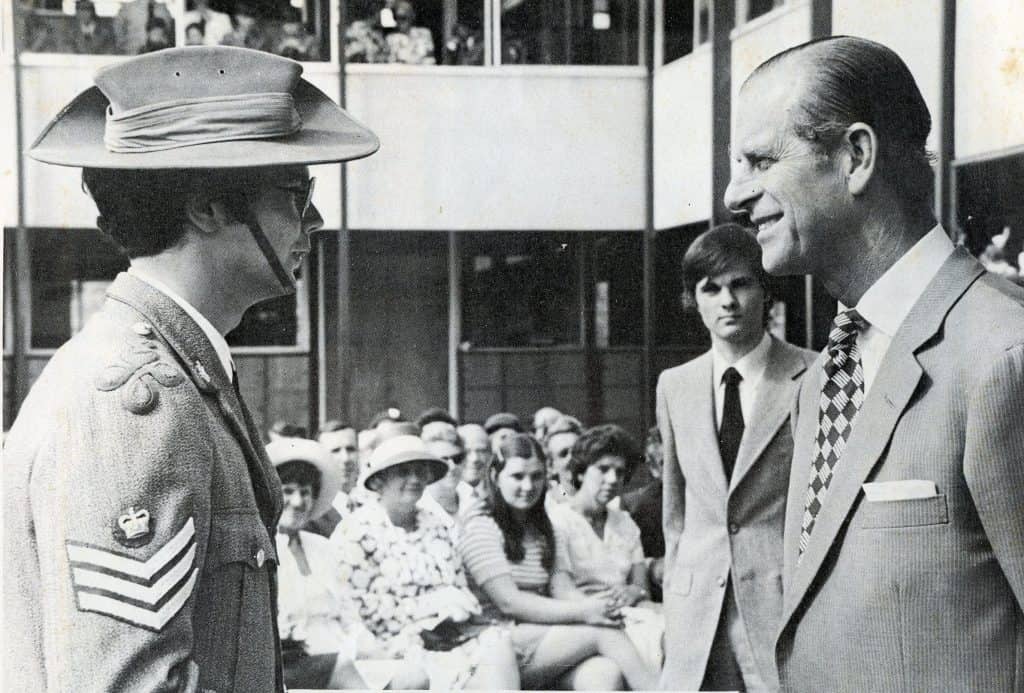 The King’s School was saddened this week to hear of the passing of Prince Philip.

Prince Philip’s first visit to Parramatta was by train, as he accompanied Her Majesty on their 1954 Royal Tour to Australia, and two members of The King’s School Cadet Corps, WO Michel Harry Read (TKS 1948-54) and Sgt Stuart Alexander Mackenzie (TKS 1948-54) were amongst the 80 cadets who farewelled Her Majesty The Queen and the Duke of Edinburgh as they left from Circular Quay.

Twelve years later the School was the recipient of a letter, for many years on display in the School Foyer, written and signed by Prince Philip on the occasion of the Centenary of the Cadet Corps in 1966.

Members of the Cadet Corps fulfilled further duties during the Royal visit in 1970 which celebrated the Bicentenary of the mapping of the eastern coastline of Australia by Captain Cook. Members of the Cadet Corps took part in a Royal Parade on 30 April at Old Government House, where the Queen opened the building following extensive restoration work on behalf of the National Trust. The newspapers of the day published photographs of Prince Philip chatting with members of the Corps.

On 2 May 1970, Prince Philip, in the full dress uniform of a Field Marshall, viewed a Parade of over 700 Cadets at Victoria Barracks, where he presented his Royal Banner to the Australian Army Cadet Corps. On Parade he was accompanied by Adjutant Colin Dugald Alison (TKS 1966-70), the Parade Commander.

The Duke of Edinburgh Award

Encouraging resilience, persistence, adventure, service and skills, the Duke of Edinburgh Award, founded by Prince Philip, was introduced at The King’s School in 1967. The first Gold Award recipient is recorded as Charles Andrew Henley (TKS 1961-67) and since then 704 boys have completed their Gold Duke of Edinburgh Award.

Prince Philip spent three hours at the School, during which time he inspected the Guard of Honour under the command of CUO Donald Hilton Gunn (TKS 1968-73). He chatted with boys as they demonstrated abseiling and camp craft down in the “Gully” and had lunch with the Headmaster and School Captain Robert Frederick McIntosh (TKS 1968-73), before presenting the awards in the Quadrangle.

Our condolences go to Her Majesty the Queen and members of the Royal Family as they mourn the loss of a husband, father, grandfather and great-grandfather, a man who has given his life in the service of others.

Visit the Museum of Applied Arts and Sciences website for an interesting insight.